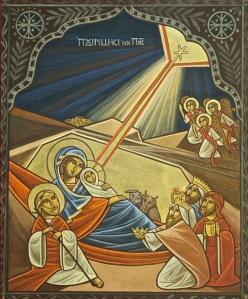 You know what happens when a portrait that has been painted on a panel becomes obliterated through external stains. The artist does not throw away the panel, but the subject of the portrait has to come and sit for it again, and then the likeness is re-drawn on the same material. Even so was it with the All-holy Son of God. He, the Image of the Father, came and dwelt in our midst, in order that He might renew mankind made after Himself, and seek out His lost sheep, even as He says in the Gospel: “I came to seek and to save that which was lost.” (Luke 19:10)

[St. Athanasius the Apostolic, On the Incarnation of the Word] 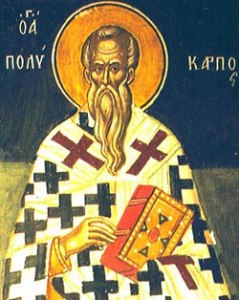 And as he was brought forward, the tumult became great when they heard that Polycarp was taken. And when he came near, the proconsul asked him whether he was Polycarp. On his confessing that he was, [the proconsul] sought to persuade him to deny [Christ], saying, “Have respect to your old age”,  and other similar things, according to their custom, [such as], “Swear by the fortune of Cæsar; repent, and say, Away with the Atheists.”

But Polycarp, gazing with a stern countenance on all the multitude of the wicked heathen then in the stadium, and waving his hand towards them, while with groans he looked up to heaven, said, “Away with the Atheists”. Then, the proconsul urging him, and saying, “Swear, and I will set you at liberty, reproach Christ”; Polycarp declared, “Eighty six years I have served Him, and He never did me any injury: how then can I blaspheme my King and my Saviour?”

[The Martyrdom of Polycarp]